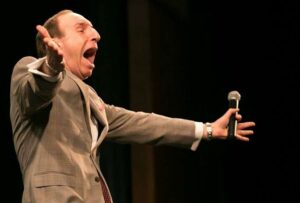 With over 20 years of stand-up comedy and television under his belt, Chris Monty continues to delight audiences worldwide. His latest high-profile projects include his stand-up comedy special titled “Just Be Happy” which can be found on Drybarcomedy.com and “What’s the Worst That Could Happen” (Amazon Prime). He has also had many television & film appearances such as Vinyl (HBO), Red Oaks (Amazon Prime), Paul Bart: Mall Cop 2 (Sony Pictures), Kevin Can Wait (CBS), and Orange is the New Black (Netflix).

In his stand-up, Chris Monty channels a refreshing and unique style of the 1960’s cool funnyman mixed with a modern chic. His unique take on current topics and storytelling are reminiscent of the comics that would keep The Rat Pack in stitches for weeks. He spans generations in that older crowds love his cool, retro style and younger crowds see a cadence that they haven’t seen on stage. It is truly something unique to experience.

Chris’s experience as a stand-up lends itself to his wide-ranging acting work also. He uses his quick improvisational skills and ability to use physical slapstick and timing to enhance his lead and supporting actor’s roles.  Whether on screen or stage, Chris Monty has the chops to make your creative endeavor something to be remembered for months and years to come. 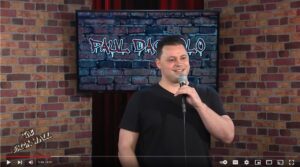 Paul Dagliolo is a new comic on the east coast scene!

Although Jennifer has been doing standup comedy for only a few years, she has been entertaining crowds for the past 25 years as a performer at the Pennsylvania Renaissance Faire, doing comedy in a giant pit of mud! She was also the co-owner of an improv comedy troupe, and also taught improvisation at Open Stage of Harrisburg. Her transition from improv and mud pit diving to standup seemed like a natural progression, plus, standup is much more forgiving on her aging body.

She approaches her audiences in an energetic and, at times, risqué manner. Her ability to interact with a crowd, due to her improv background, ensures that each show is different and unique.

She has opened for numerous comedians, such as Earl David Reed, Larry XL, Kevin Lee, Liz Russo and Patrick Garrity. She has performed in clubs such as The Comedy Zone, Comedy Cabaret and Bonkerz Comedy Clubs.