Jay Black left his job as a high school English teacher ten years ago to embark on a career as a stand-up comic. In that time, he’s achieved an incredible amount of success.  On the stage, Jay has headlined clubs across the nation, from the MGM Grand in Las Vegas to the Tropicana in Atlantic City and just about every comedy club in between. He also toured extensively in Europe as the host of the US Army’s “I Am Strong” tour. He’s met with equal success on the college market, performing at nearly 1,000 schools across the country, winning the “College Performer of the Year” award once and the “College Comedian of the Year” award three times. For the last ten years, Jay has done a weekly spot on WIP Radio, discussing television, pop culture, and sports. 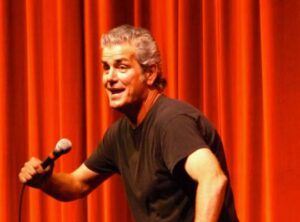 Patrick O’Donnell has been a comedian for over 30 years. Pat has been seen on Comedy Central, A&E’s Comedy On The Road and was a $10,000 winner on ABC’s America’s Funniest People. He has also written jokes for Jay Leno and Jimmie “JJ” Walker.

O’Donnell is a high-energy act, who spices up his performance with his knack for impressions. Former presidents, movie and TV stars could pop up anytime as searches for the humorous side of life.  Pat has worked all over the country and is a regular at the Comedy Stops in Atlantic City and Las Vegas. He plays colleges and clubs as well as corporate functions for companies like Comcast and MBNA.  Pat talks about today’s current events, his Catholic upbringing and the trials of a man who takes care of the kids, as well as marriage in general. He light-heartedly pokes fun at all of them.  Over the years, Pat has been the co-host of a cable talk show, acted in plays, done commercials and constantly updated his act to reflect his life. He hits the stage with a smile and leaves the audience laughing.

Originally from Harrisburg, Pennsylvania, Marc understandably moved to Philadelphia as quick as he could, to pursue comedy, get married and become a father. Marc became known for his clean, quick-witted observations of the odd things we put ourselves through along with poking fun of himself and fatherhood. He is the host and creator of the web-series/podcast, “Get to the Joke.” He was selected to perform in the Charm City and New South comedy festivals.